Meta opens its first store - what you can buy there 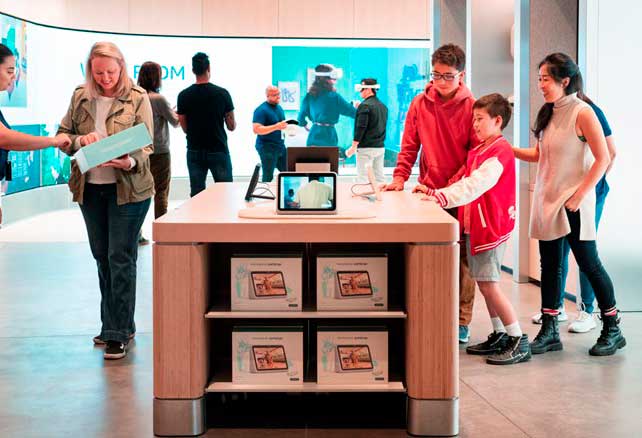 Mark Zuckerberg's vision of the Metaverse should get around: People should therefore now be able to try out the hardware for it in classic stores to get a taste for it. The first "meta store" will soon open in California. Facebook was the past, the Metaverse is the present - that's Mark Zuckerberg's plan. That's one of the reasons why he renamed his company from Facebook Inc. to Meta last fall. His plan puts everything on one card and is even getting his employees pretty riled up. The report in Business Insider says the CEO is literally obsessed with the idea of his Metaverse and its realization.

Metaverse is the term used to refer to a notional virtual room that would be created by the interaction of virtual, extended, and tangible realities - encompassing all things virtual worlds, extended reality, and the Internet. A merging of platforms like Instagram, TikTok and Twitter, augmented reality applications as well as our real worlds. A spontaneous get-together from Brussels with an old friend at London's favorite café, despite the reality that you're based in Berlin? Should soon be possible thanks to Zuckerberg's Metaverse.

Metaverse: It's the Internet 3.0

Experts believe the idea has the potential to revolutionize and reshape our society. But Mark Zuckerberg has to come up with something so that people become acquainted - and perhaps even create their own avatar for the Metaverse, which is currently still curiously floating around the web without a body. So he is now setting up a Meta Store - a completely standard real-life physical store where anyone can buy the right hardware for virtual living.

Or just try out "how fun and exciting" it can all be, according to the company blog.

The plan seems foolhardy and downright antiquated: An on-site store for something that takes place on the web? But that's exactly what the former Facebook company Meta is all about: the blending of real life and virtual life. Virtual reality is meant to become part and parcel of your daily life. The right accessories for this will be on offer from May 2022, in the first Meta Store in the world. The store will be opening right on the technology company's corporate campus in Burlingame, California, around 26 km south of San Francisco. The Facebook Reality Labs are also located there.

Smart glasses, VR tools and more: what to buy at the Meta Store

Among the products that interested buyers will be able to purchase there are Meta's intelligent screens and mobile tablets, which make it easier to connect with their friends in Metaverse virtual videoconferencing sessions. VR headsets from virtual reality content provider Quest, which is part of the Meta Group, are also to be available there, as well as the Ray-Ban Stories "smart" glasses that Meta introduced this past year.

Various demonstration areas will allow customers to test the technology right away in the Metaverse. Sounds almost a little like an Apple store. Metaverse is actually the market share leader when it came to VR devices. The technology analyst IDC estimates, according to a CNN report, that nearly eleven million headsets will be shipped in 2022 alone. That represents a 96 percent increase over the previous year.

However, Meta is making this move also partly because its rival Google also opened their first retail outlet in the past year after opening numerous pop-up stores - and others are in the pipeline. Meta can obviously imagine this, too.