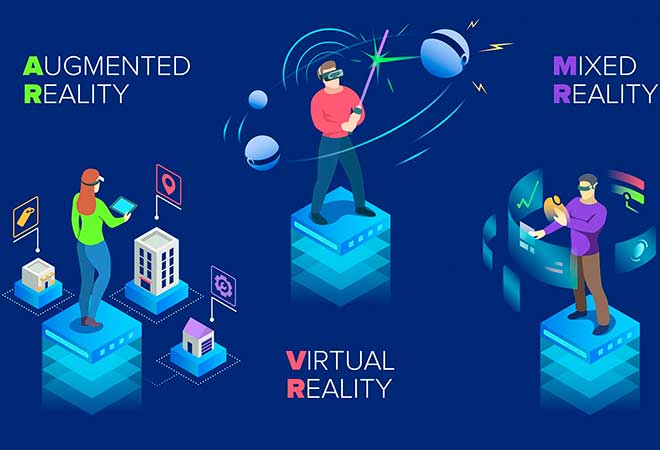 Virtual, augmented, and mixed reality - what are we talking about? Video games, apps, marketing tools... New virtual simulation technologies are on everyone's lips today, and their applications seem to know no boundaries. And yet, when it comes to the distinction between virtual, augmented, and mixed reality, well... let's be honest, we're not so sure about that question.

Virtual reality can be called the most immersive of the three technologies.

In fact, with virtual reality, the user is immersed in a virtual world with three dimensions to move around and interact with each other. In this way, the experience is richer and more intense because, in addition to seeing, hearing is also possible, unlike augmented or mixed reality.

To use this technology, it is necessary to wear a compatible headset in which virtual images are projected in front of the user's eyes.

Virtual reality is a 360-degree world.

In virtual reality, you feel like you are there. You can be immersed in a virtual world.

While the technology is often associated with video games, companies also seem to be using immersive experiences to attract new customers. That's precisely what Marriott Hotel Group has done. To lift consumers' spirits and book a dream trip, it has created a virtual reality experience where paradisiacal destinations such as Hawaii can be seen in 360°.

Unlike virtual reality, augmented reality uses the real world to superimpose information or animations (in 2D or 3D) with which the user can interact.

Augmented reality superimposes additional objects or information into the field of view.

Augmented reality requires you to be present on the spot to see this information.

For augmented reality, you need a digital tool to see the information (smartphone, glasses).

Simply put, augmented reality is the overlay of digital content in the real world. We'll never forget you, Pokémon Go!

To use this technology, you need a particular device, just like in the case of virtual reality. It can also be a headset (or glasses), but more often than not, an access device at hand, such as a smartphone or tablet, is used.

The IKEA Place app is an excellent example of augmented reality, where you can look at an item of IKEA furniture in your living room before buying it through your smartphone.

The terms "augmented reality" and "mixed reality" are often misused or synonyms. Nevertheless, a distinction can be made here.

In mixed reality, meaningful objects are integrated into reality.

This technology is most reminiscent of the form of a hologram. Just like that, welcome to the future? Unlike augmented reality, the created "hologram" perceives all truth and integrates perfectly with the environment.

While virtual reality presents reality in an interactive computer environment in real-time and allows you to experience it, augmented reality expands reality with virtual objects.

The hype around virtual and augmented reality is insanely high and in danger of collapsing, as it did with 3D video. 3D only plays a role in movies. 3D TVs and screens no longer matter.

Virtual reality is only suitable for consumers to a limited extent. It would help if you had special and expensive glasses and powerful computer equipment. In addition, there is a dire need to address the frequent phenomenon of motion sickness or VR nausea, which can significantly spoil the experience. Because of these circumstances, virtual reality is hardly suitable for the mass market.

Conversely, augmented reality has a chance to make a name for itself in a wide range of applications in specific fields. The problem is that specialized content production is required, which can cost a lot of money and therefore does not pay off everywhere.